Spring is just around the corner

I was walking along a footpath on my way to our local surgery the other day and noticed some little green shoots - snowdrops making their welcome appearance after all the recent snow, ice and cold weather. I always find them such a hopeful sign that Spring isn’t so very far away now, a reminder of gentle, changes occurring naturally. White flowers making their way towards the daylight, long before we might have noticed any shift in the season. 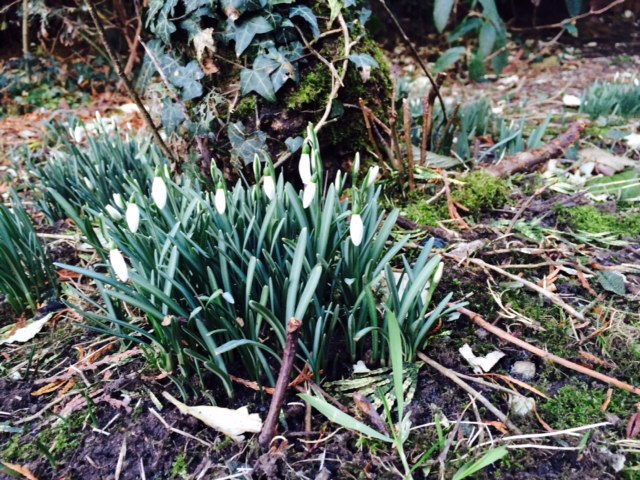 I have loved NLP for a long time - but it is still possible to be reminded of how helpful and life affirming the simplest of tools can be.  I was facing a challenge recently and I reached for the simplest tool in the NLP book: the Present State, Desired State model.  In a nutshell this model gets us to explore -  ‘Where are we now?’  And then in lots more detail and richness, ‘Where do we want to be instead?’  There may well be things that we cannot change about a situation however we can think about it differently….

With a leap of imagination we can ask:

“Supposing I woke up one day and it was fixed … what would that be like”?

As I begin to really explore these questions in a rich sensory way – my state begins to shift, I start to relax and feel more positive and in control.   The issue seems like a much smaller part of the picture, not the whole.  My thoughts are filled with more colour and vibrancy and a sense of calm and normality returns.  In this state of mind – my body feels more relaxed and at ease and I can trust I’ll make the best choices available. Gentle, positive changes, happening naturally.

We wish you every success and happiness as you grow in 2015!
Warmest regards from
Henrie and
NLP in The North

By Henrie Lidiard and Ann Slack

In one study of 16 Bone marrow transplant units half of all Doctors and nurses were sowing marked symptoms of burn-out (Molassiotis 1995).

Some reflections on research

By Dr Miranda Thurston, Centre for Public Health Research, University College of Chester
A lot of research over the last 10 years or more has indicated that cancer patients and their carers do not always experience high quality care. A recurring theme of much of this research has been that health professionals frequently have poor communication skills, which significantly undermine the quality of interactions between patients’ and clinicians and often leave patients and carers feeling uncared for and ignorant about their illness. At a time when both patients and their carers need empathetic support, it appears that they are often least likely to experience it. This has led to an increasing focus on the quality of cancer care in general, and a specific focus on improving the quality of interaction between patients, carers and clinicians through the enhancement of health professionals communication skills.
The Centre for Public Health Research was commissioned to evaluate the ‘Living with Cancer’ Project. It was clear at an early stage that the use of neuro-linguistic programming in cancer care was unusual. A thorough review of the literature revealed that NLP had rarely been used to support patients or carers in dealing with their circumstances, or to try to improve health professionals’ communication skills. What the literature review did reveal to me was that NLP was quite a different approach to the whole subject of ‘communication skills’, which seemed to often be viewed in terms of a set of technical exercises, somewhat divorced from the empathetic dimension of human inter-relationships. NLP seemed to offer considerable potential for health professionals to improve their capacity and capability to care for their patients through developing the affective side of communication and through this, be more responsive to patients’ and clients’ needs and desires, rather than making assumptions about what these were and risk behaving inappropriately.
At an early stage in the research project, considerable attention was given to deciding on an appropriate methodology. It was important for the study to be robust, so that the findings would have a better chance of being taken seriously. However, it became clear that the most appropriate methodology would be a qualitative approach, using focus groups and interviews. This would allow patients, carers and health professionals to talk at length, and in some detail, about their views of NLP. Qualitative research aims to explore matters in depth, and tries to understand things from the point of view of the interviewee: patient, carer, or health professional. Because of this, the findings tend to be based on relatively small samples and can not be quantified. This can mean that people view the findings as ‘anecdotal’ or ‘unrepresentative’ rather than as giving insight into the views of particular client groups.
In terms of health professionals, it was evident that many thought that NLP build on their existing knowledge of communication. However, it was apparent that some professionals were challenged by an alternative and different approach to communication (4 out of 55 according to post training evaluation records Lidiard Pers. Comm..) . Reflecting on this, it may be that many health professionals are too wedded to the biomedical model of practice, a model that does not tend to value the affective aspects of communication and values ‘treating’ above ‘caring’. This is unfortunate, because patients and carers who had attended the NLP classes were unanimously positive about their experiences and described the ways in which they had been helped to develop coping strategies in extremely moving terms. It struck me afterwards that it might be valuable for such patients to talk to clinicians about NLP.
Click here to read the full Research Report on the Living With Cancer Project

“Dr Henrie Lidiard is one of the finest NLP Master Trainers in the world. She combines her scientific rigour and precision with an exciting and energizing teaching style. She has also done outstanding work in the public health community and in the field of modelling. She is one of the leading authorities in NLP on working with physiology.”

® 2022 NLP in the North
Thanks to Unsplash.com and @guillealvarez, @ianstauffer and @khouser01 for their inspirational photos
Top